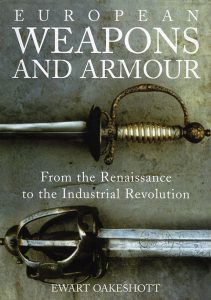 If you want to read about the weapons and armour of Europe rather than look at a book full of pictures of swords and armour, then this is the book for you. Ewart Oakeshott is the rockstar of arms and armour of medieval Europe.  Sadly no longer with us, this book should be on everyone’s bookshelf.  The book covers the Renaissance to the Industrial Revolution.

Compared to other books I have reviewed recently on arms and armour  – The History of Armour 1100-1700, being one of them – this book feels more academic and like a textbook for a degree course.

This is not a bad thing, just an observation. This paperback will take your knowledge of the period to the next level.  Surprisingly the book starts with the development of the handgun. The handgun sets the tone for the period as its development sees a change in combat and armour. The book then moves neatly on the Staff weapons (who knew there were so many different names for big, long shaped, pointy things.), and the percussive weaponry of maces, war hammers and other polearms.

The book mainly covers armour from 1400 – 1525 and then its gradual decline.  There are great sections on two-handed swords, rapiers, curved swords, single edge swords, dagger, and the small sword.  Whatever period your study, if there are swords involved, this book will have plenty of information.

Oakeshott uses the language of the manufacturers where possible, so you get to learn lots of German, Spanish, and Italian terminology.

One thing I really liked about this paperback was the further reading or reference sections at the end of each chapter rather than as single appendix at the back of the book. Talking of the appendixes, the two at the back of the book, one on tournament armour and one on American 19th-century swords (not sure this warranted its own section as it is only a page long and looks almost and afterthought.)

The timeline at the back of the book is something everyone should read, covering all the major events of the period. It also shows who was making what, and also showed important people of the period (Heads of State, Musicians, Writers, Merchants, and Politicians).  This helps put people, place and the tools of war firmly in their own context. They should make this a pull out poster…

All in all a great book, and one that will not sit on the shelf but come out more and more.  This book really is a keeper and would be a great addition to anyone’s library. For HEMA types, this is a great book to help show you the development of the weapons we train in – not just the actual mechanics of why we do what we do, but how the weapons themselves were developed.