Some of you may know I have been working with the HeroicSport guys for nearly a year now. These guys have made the various pahlavandles which are attached to water bottles to create Indian clubs. Filled with water, rice, sand or stones. The handles create an easy tool to improve flexibility but also coordination, range of motion and conditioning.

Clubs were originally made for warriors to condition themselves for combat, so it is no surprise that those of us who train in weapon based martial arts, would look to enhance our training with such tools.

HeroicSport also have a range of exercise programmes to follow and have even created programmes for the historical fencer. These are online videos and some are made specifically for HEMA practitioners to get more flexible, conditioned and stronger..

Checkout their other programmes here:

For the handles themselves:

The best option is to look at the starter pack option:

In HEMA, Indian clubs are becoming one of the go-to tools for flexibility and conditioning. It appeals to the historical swordsman as it has a history of working specifically for the warriors of Persia and India. The British brought back clubbells from India, and the military introduced them into training halls across military bases during the Victorian period.

One of the downsides is the cost of a pair of clubbells as these tend to be handmade and only a few places stock them. In a huge coincidence, I saw the Indian Clubs DVD being offered by Corsair Wares in Scotland, which I have now bought and watched. The DVD is very well produced. The backdrops are amazing and sometimes distract from what is going on.

The DVD provides a good basic level of clubbell exercise, nothing too complex, and has been developed with a HEMA Practitioner in mind.

I have also been talking to Neil Meekings, who put me onto Pahlavandles ™. 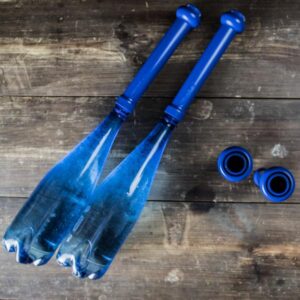 This is a hugely useful tool where sword practitioners can use Pahlavandles ™ to build up their own set of clubbells without the cost.

The Pahlavandle ™ fits carbonated drink bottles made of plastic. All PET soft drink bottle top threads are required use the international PCO28 norm.

At 20 cm length and 65 grams, the Pahlavandle ™ is easy to carry around. With an average diameter of 28mm, it is suitable for children, women and men.

The unique design and features of the Pahlavandle ™ allow you to find the right starting weight, and progress to a heavier club as skills and strength improve. Experiment with different fillers to increase weight up to 3kg. 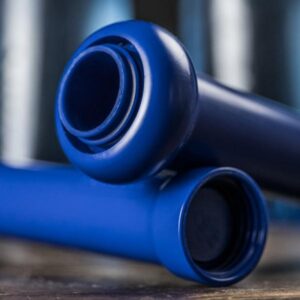 By filling the Pahlavandle ™ halfway, you can create a shifting weight.

This shifting weight provides audible feedback to help timing and coordination. A fluid swing makes no sound, letting you clearly know when you are swinging optimally.

They also have an extender to turn the handle into a mace configuration.

On top of this , the guys have been really busy and created an XL version which replicates the larger club or meel.  These are great as they collapse down and you can put your other handles inside.  Great for instructors looking to run classes – each XL can hold 5 pairs of smaller handles.  Great for circuit training too – two XLs and 10 pairs of Pahlavandle is enough for a class workout  We will be doing much more of this in 2019.

We have become ambassadors for Pahlavandles and have agreed a great deal for bringing these handles to the HEMA Community in the UK.  If you are interested in a pair of these tools, visit: https://www.heroicsport.com/

There is a huge upsurge in interest in ancient and medieval warfare and I wanted to share six new or coming soon titles you should keep an eye out for from pen and Sword books. 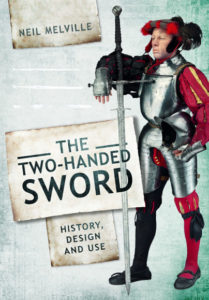 The two-handed swords found in modern museums are often so large and elaborately decorated that the onlooker might question whether such an apparently impractical weapon could ever have been a serious weapon of war. Yet during the Late Middle Ages, although never numerous, such weapons could instil dread in those that faced them on the battlefield and in skilled hands posed a very real danger, being capable of inflicting fearsome wounds.

Neil Melville explains how, from the late-13th century, technological advances made the development of larger swords requiring both hands both possible and desirable. From their origins in Germany he traces their development and divergence into regional variations. He examines the evidence for their use on the battlefield over 300 years, most notably in the hands of the Swiss, the German landsknechts and the Scottish clans, before considering their later use in fencing and as ceremonial weapons. Practical advice on fighting with the two-handed sword is also given, drawing on contemporary fencing manuals. The detailed and informative text is beautifully enhanced by dozens of illustrations. 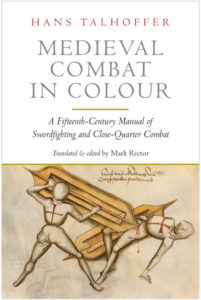 Hans Talhoffer’s professional fencing manual of 1467 illustrates the intricacies of the medieval art of fighting, covering both the ‘judicial duel’ (an officially sanctioned fight to resolve a legal dispute) and personal combat. 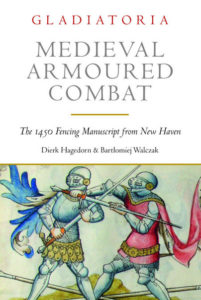 The “Gladiatoria” group of German fencing manuscripts are several editions of a treatise on armoured foot combat, specifically aimed at duel fighting.

Gloriously-illustrated, and replete with substantial commentary, these works are some of the greatest achievements in the corpus of late medieval fight books. These works have both tremendous artistic merit and incalculable historical value.

In this remarkable full colour volume, authors Dierk Hagedorn and Bart&#322;omiej Walczak elegantly present their work on the copy of this treatise now in the Yale Center for British Art, including a reproduction of the manuscript, a full transcription, and translations into English.

The work includes a foreword by Sydney Anglo which explains how the work shows a highly sophisticated pedagogical system of movement and applauds the editors for presenting the material in a clear and practical way.

Additional essays discuss other aspects of the manuscript – including a tale of Dierk Hagedorn’s adventures tracking down the manuscript. 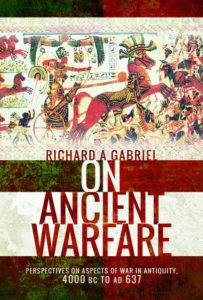 Richard Gabriel has been studying and writing about ancient warfare for nearly half a century. He has written fifty-five books on the subject (before this one) and over three hundred published articles. These decades of scholarship are complemented by direct military experience as a US army officer (now retired). This book presents his thoughts and perspectives on a selection of aspects of ancient warfare that he has found of particular interest over the years. It does not aim to be a comprehensive overview nor a coherent narrative of ancient military history but adds up to an illuminating, fascinating and wide-ranging discussion of various topics. With topics ranging from broad topics such as the origins of war, through logistics, military medicine and psychiatry or the origins of jihad, to specifics such as the generalship of Alexander the Great (Gabriel’s not a fan), Scipio and Hannibal, there is plenty here for the either the general reader or academic scholar. 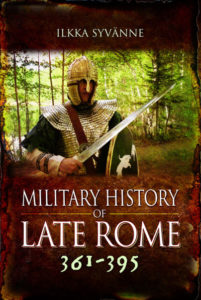 This is the second volume in an ambitious series giving the reader a comprehensive narrative of late Roman military history from AD 284-641. Each volume (5 are planned) gives a detailed account of the changes in organization, equipment, strategy and tactics among both the Roman forces and her enemies in the relevant period, while also giving a detailed but accessible account of the campaigns and battles.

This volume covers the tumultuous period from the death of Constantius II in AD 361 to the death of Theodosius. Among the many campaigns covered, it therefore includes the Emperor Julian’s fatal campaign against the Sassanian Persians and the disastrous defeat and death of Valens at Adrianople in 378. Such calamities illustrate the level of external threat Rome’s armies faced on many fronts in this difficult period. 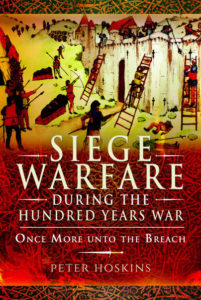 Histories of the Hundred Years War have been written, and accounts of the famous battles, but until now no book has concentrated on the sieges that played a decisive role in the protracted struggle between England and France. Edward III’s capture of Calais in 1347 was of crucial importance for the English, and the failure of the English siege of Orléans in 1429 was a turning point for the French after the disaster of Agincourt. Throughout the war, sieges were a major weapon in the strategic armouries of both sides, and Peter Hoskins’s perceptive and graphic study is a fascinating analysis of them.

He describes the difficulties faced by besieger and besieged, examines the logistics and resource implications of sieges, and provides a comparative assessment of siege warfare alongside set-piece battles and the English strategy of chevauchées. Key sieges are reconstructed in vivid detail, other sieges are summarized, and the book is fully illustrated with photographs and plans.

Sometimes it can be quite difficult finding the right present for someone on your life that is a confessed sword nut. With that in mind, I wanted to give you some ideas of what you can get that special someone.

HEMA is not simply swinging swords, although that is the perception. We try to emulate and recreate the sword styles and techniques written down from the 13th century onwards. For the styles, we practice here in Broadstairs, that is a German tradition so any of these books are suitable as gift…

Codex Wallerstein: A Medieval Fighting Book from the Fifteenth Century on the Longsword, Falchion, Dagger, and Wrestling

Yes do consider the Game of Thrones box set, but this will not help your sword nut learn the fundamentals of swordsmanship. That’s a much bigger article for another time. For now, here are a couple of ideas of DVDs that will be useful for them.

Obsesseo – The Art of Sword and Buckler Combat

The Messer of Johannes Lecküchner

There can be a lot of equipment and some is personal choice. I am going to cop out a little bit here and suggest you get them a gift voucher from one of the main equipment providers. In this way, they can put the money towards the equipment they need.

If you are considering buying them a sword for Christmas and you want to see their little smily faces when they open it, you really needed to have ordered in back in March. Sorry!

Sadly good quality training weapons that can be used are hand made to order. Those that can be bought online and from eBay tend to be ornaments and not suitable for use.

If you want to buy them a sword you can look now and maybe it could be something for next year or their birthday! Waiting times can be 6 months to 18 months. Here are a few recommended sword and other weapon suppliers.

I hope this helps…