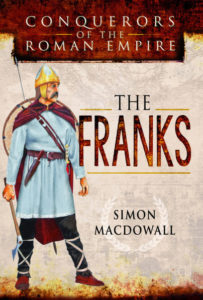 One of the series of books looking at the groups that defeated and replaced Rome. In the case of the Franks, this Germanic tribe took over Gaul, and gave its name Francia / France.

The book looks at the fighters, weapons and tactics the franks used against the Romans which ultimately led to their victory against the late Roman Army at Casilinum (just north of modern day Capua) in 554AD.

While lots of us think that the fall of the Roman Empire was more about the breakdown of the Roman war machine, the book shows us that the Franks were sophisticated soldiers that were able to fight in pitch battles and defeat armies.

But it didn’t start there, the book takes us through a period of around 250 years from the first Frankish incursions into Gaul.

My favourite chapter is chapter 9, which discusses the Frankish way of war. It is also interesting that most of the commentary and knowledge about this comes from Roman authors.

A few things I learned from the book. The Angon or barbed spear, sounds like a huge barbed arrow was a favoured weapon. Also while lots of the Germanic tribes fought on horseback, the Franks did fight both as cavalry but mainly on foot as infantry, at least this is what our Roman authors would have us believe.

The book also provides some insights to the roman cavalry tactics of the time.

For anyone is interested in the late Roman, early medieval period, this book is a great read, I found it is easy but very informative read. The maps and chronologies where fantastic and I can see myself referring to them again and again.

Also the lists of the Roman army in Gaul staggers me as I never realised this stuff was still in existence. I can see this being a great book for military historians, wargammers and period reenactors. I would highly recommend this book.