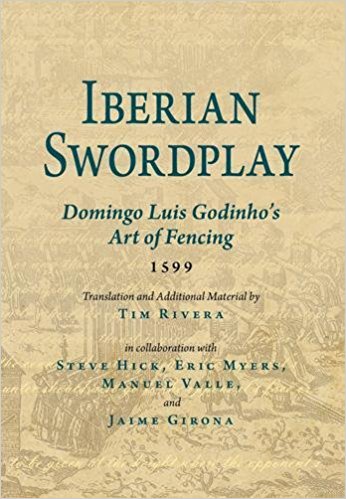 In 1599, during the period when the Portuguese crown was united to the crowns of Castile and Aragon, the Portuguese master-at-arms Domingo Luis Godinho wrote a manuscript in Spanish entitled Arte de Esgrima (The Art of Fencing). Although his life is largely a mystery and Godinho s text was never published in his lifetime, today his manuscript is of utmost relevance in the study of Renaissance Iberian fencing.

It is the only complete treatise discovered so far describing the ‘Common’ or ‘Vulgar’ style of Iberian fencing, first documented in the fifteenth century, but by Godinho’s day, displaced by the new system of La Verdadera Destreza (the true skill). The work includes instructions for the single sword, a long-bladed, cut & thrust weapon taught alone and with the use of the shield, buckler, dagger, and cape, as well as paired with a second sword.

What is of interest to more HEMA practitioners

Godinho’s instructions also included the longest known text on the use of the montante, or two-handed sword, a devastating weapon that was used by soldiers and body-guards, in duels and battlefields, in crowded streets and aboard galleys.

Translator Tim Rivera provides a detailed introduction that explains Godinho’s relationship to earlier masters of the ‘Common School’ of swordsmanship, and a short primer on the various weapons, guards, parries, footwork and terminology of the tradition.

With my own Regenyei Montante being delivered in January 2018, Godinho’s publication will form the backbone of our Montante training in 2018.