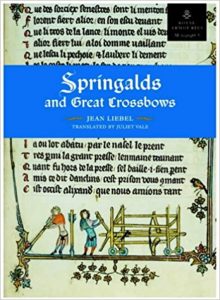 When I was sent this book to review, I was puzzled to know what a Springald was. Basically this book covers what we would now know as Artillery, but before the advent of gunpowder. So machines made from wood and ropes, levers and torsion. It is fascinating to have all this information on one book. The first thing that struck me in the book was that springalds and crossbows were different from other siege or artillery weapons in that they are low trajectory weapons, unlike their more popular cousins – the trebuchet or mangonel, which launched huge rocks high and far. Springalds were medieval period weaponry based on the Roman Ballistas.

But these were not just simply short range weapons, experiments in the book show that a springald could propel a large bolt over 160 metres. Springalds were usually gate mounted so they provided a powerful defence at the weakest point of a castle.

I have been to lots of castles but never seen a replica or mention of springalds during the early Middle Ages. Even the great Norman castles or Rochester and Dover don’t have them (although Dover does have a trebuchet). Think I might have to pay them a revisit. The book also shows paintings from the 14th century of wheel mounted springalds. Even Da Vinci seems to have got in on the act with springald designs.

A lot of the ports of the Hanseatic leagues appear to have had springalds both tower and gate mounted. I would imagine huge bolts would be quite damaging to ships if the need arose to use them.

The book covers some quite interesting design pictures. I wonder if any of the reenactment groups have these? I know some roman groups have ballista.

Here is a great YouTube video of a springald

From springalds, the book moves onto crossbows and not just small handheld crossbows, but two foot or windlass crossbows. Surviving examples of these crossbows have between 1.6 and 1.8 metres wide bows. Hardly something to be easily carried into battle.

In the 1200s, France seemed to have them and their spare repair parts in 15 towns across the kingdom. There is even mention of the papal palace in Avignon having two of them.

Again we see these become cart mounted, and even specialist bolts are used, including incendiary bolts…

The book then goes onto cover ballistics with lots of research and illustrations about effective ranges. For the period wargammer, the book provides a very useful resource for not only defensive siege equipment but provides charts and tables about ranges. If your ruleset doesn’t have springalds and great crossbows. They can now!

I can honestly say this was a fascinating read and I can wait o explore more castles now and look for signs of these weapons. If I had the space and technical ability I would love to make a springald.

If you are interested in the development of artillery or siege equipment, this book should be in your library of resources as it appears to be the only book of its kind of on the period.

You can buy this book on Amazon. You can also pick it up direct from Pen and Sword Books. 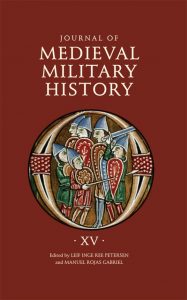 How on earth have I not seen these books until now.  I also didn’t realise these set of books are actually the annual publication of De re militari: The Society for Medieval Military History.  With that in mind, I was really excited to delve into the Journal of Medieval Military History.  The first thing to say, is this is very well put together, for an organisation journal it is a very nice tome and not a magazine type affair you tend to expect.

This is a review of Issue XV.  I can see I am going to start saving for the previous issues.  Looks like this would build into an set like the Encyclopedia Britannica of medieval military history.

I think I am also going to have to become a card carrying member of De Re Militari.

The book doesn’t contain a theme beyond medieval military history so there is a wide array of subjects, some taken from a conference in 2009.  From Roman warfare, Norman conquests,  to how the English adapted during Viking wars, to the conquest of Estonia, plus a nice article on the Longbow.

Each chapter covers a different topic by a different author so the book provides so a wide range of ideas on medieval strategy and tactical thinking.  It is interesting to see some very different topics presented together in the same book.

I was very interested in the Roman, Viking, and Longbow contributions.

Richard Abels section on English strategies shows a military strategic link between middle ages military doctrine and the strategies espoused by Vegetius in his book on later roman military tactics – De re Militari.  It also shows why siege conflict becomes so popular as Generals in roman times are told to starve an enemy rather than fight them.

The chapter on the longbow was very interesting as the author says most people think of the longbow being present and decisive in every battle fought during the middle ages, but as he points out, they were used in great effect when in combination with heavy cavalry and infantry.  In some decisive battles such has Benevento in 1266, Manfred of Sicily has some 10,000 archers and foot soldiers but the day is won by cavalry.  So it was as much about strategy and tactics as much as having bowmen on the field.

There are a few chapters I glossed over as they didn’t currently appeal to me but I know they are there when I have a bit more time to investigate.

If you are a medieval military history buff, you will want to check out this range of books.

You can buy this book on Amazon 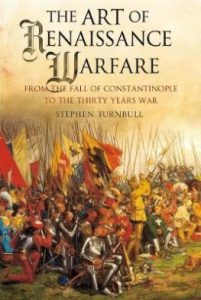 I have read a few of the Japanese samurai history books by Stephen Turnbull and was surprised to learn he has an interest in Medieval and Renaissance history too. The book covers the period of the 14th and 15th centuries.

During this period the book charts the development of arms, armour, and tactics in warfare.  The impact of technology on changes to the knightly arts of combat. The skill of the individual knight in combat seems to neutralised by. New range of weapons, from huge cannons to pike tactics.

From a German martial tradition, this period seems to see the start of the decline as Germans clung to their longsword systems, while other countries moved with the times and embraced new technology and weaponry.

I also saw that the landsknecht were mainly pikemen.  Not sure why I didn’t know that.  For some reason I saw them as schlachtschwert wielders in fancy pants.

For anyone interested in the development of warfare, this seems like a period of massive invention and the almost industrialisation of war not seem again until the First World War.

The sections on Eastern Europe during this time are very interesting as it is not part of history or region I have read about before.  There are complaints from scholars about this book, but to be honest for me I found the book informative and a great jumping off point into further research.

If it wasn’t for the book I would not have gone on to look for images of the huge bombards Turnbull talks about.  Holy moly, weapons capable of firing 1200lb shells, in the 15th Century.  I wonder what the fighting elite solider thought about his future in the light of such weaponry.  Hardly honourable way to conduct war..

But we see the change from armoured knight to lightly multi armed cavalryman.

The book should be of interest to anyone studying military history and use it not as a definitive guide but more as a gateway book to more research.